Vault Festival co-founder Mat Burt: ‘Vault is a mix of the ridiculously silly with the poignant and breathtaking’

Vault Festival co-founder Mat Burt: ‘Vault is a mix of the ridiculously silly with the poignant and breathtaking’Visionary ArtsJanuary 25, 2019January 25, 2019 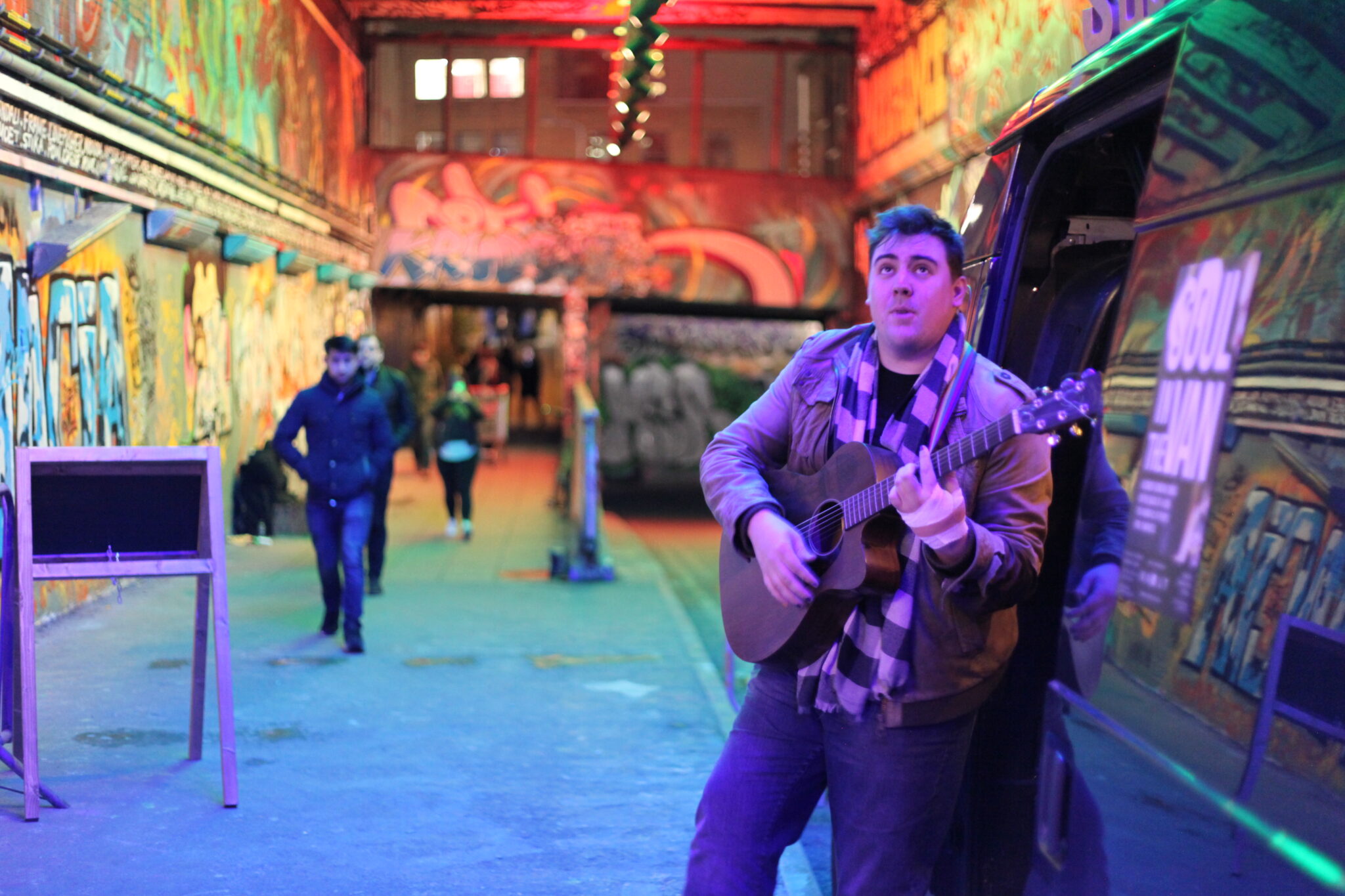 Vault Festival, London’s largest theatre festival, launches this week. More than 70,000 people attended the festival in 2018 and that figure is expected to rise this year, with a whopping 425 shows being performed in and around the Vaults in Waterloo by more than 2,000 artists; it’s like the Edinburgh Festival, but without the commute. That’s important for any local artists making new work – the overheads of putting up actors in hotels can be crippling compared to covering the cost of a train ticket to commute into Waterloo. There is also no upfront cost to the theatre companies involved, and Vault offers a 70:30 box office split to the theatre company or artist making the work, which is one of the best rates available. You can also opt for a 60:40 split with a lower minimum guarantee if you’re worried about getting bums on seats to see your show, which takes some of the pressure off. This means artists who can’t afford the financial risks of the Edinburgh Festival can sometimes afford to have their work seen at the Vaults – and that leads to greater diversity, more risk-taking and cheaper ticket costs to the theatre-goer. Vault Festival is showing in Waterloo from 23rd January to 17th March, featuring the best in new writing for theatre and comedy, immersive experiences, cabaret, live performance and late night parties.

Vault festival has always put an emphasis on trying to create a level playing field for artists to enter their work. Is this something you are particularly proud of?

We all know the arts industry is terribly unbalanced because a lot of people simply can’t afford the time and finances that it takes to put a show on. The marketing costs for Edinburgh, for example, are frightening – it is an insane world where it costs so much to make something so high risk.

We’re trying to effect change in the creative sector and make it sustainable for both the artist and the festival. What we give is space: to innovate, take risks and cooperate with each other.

It has transformed into a behemoth from being quite a small-scale festival back in 2012 with only 25 shows and 7,000 attendees. Last year more than 70,000 people saw over 350 shows.

It is amazing how it has grown. When we started it was one of many but has swelled to take up the whole year – we are planning for next year already! I am surprised by the scale of the festival every day but the way it has grown so quickly in size is proof that our initial instincts in 2012 were correct; that people wanted a more accessible platform to do this kind of work. Ultimately we have the easy job in running the thing, but it takes extraordinary commitment and dedication and bravery to bear all in a one hour show.

53 per cent of the shows this year are by women, is that right?

Yes. It’s interesting the gender balance thing – it is something we were thinking about recently. We actually don’t need to try very hard to make that 50-50 gender split happen, at the fringe level, there is no shortage of female creatives, it is actually further up in the industry, in the West End programme where they are struggling to put work on by women. So the question is, what is happening to these talented people that they are not able to progress? Vault is proof there is a 50-50 balance.
The simplest and most encompassing answer is that the patriarchal capitalist structure we live in is a difficult thing to do something about.
The more we a talk about this in meetings, the more frustrated we feel about what we do – we say there is no barrier to entry with Vault festival, but of course there are people who struggle to make the art they want to make.

And a quarter of the work is from LGBT+ artists?

That is self-selecting – that’s a relatively new thing, to examine the work in terms of [what the demographic of] the company is, but I hate the idea of pigeonholing thing – you wouldn’t say, well you are a woman and therefore you will like this show by a woman, but at at time when the arts are trying to show people that their stories are being told it is good to have companies who give a breakdown of the sexuality and gender of their actors.

What about race? How representative are you as a festival?

We are too white compared to the makeup of London, but we live somewhere where the legacy of social barriers is so strong but the visibility of BAME people and shows is on the increase. We do try our best but we live in a broken system whereby those in non-white households are disadvantaged from day one.
One thing we have never been able to do is a bursary – we can’t afford to commision anything just yet – it is ridiculously expensive to do that.

Can we delve into the economics of the festival a little more? Is it staff? Do you pay a wage?

This year we decided it was a good idea to pay ourselves a wage. It is in the budget. I personally do a lot of corporate and experiential events to get an income and historically have not made any money from the festival but this year there is a line in the expenses with my name on year we have a five-person steering team who are paid a small amount. We started with nothing and we are in a position where we have a team who are paid and that makes me feel quite good to think about.

Any shows coming up in the next few weeks that you are particularly looking forward to? I saw David William Bryan’s show In Loyal Company at Edinburgh last year and saw it’s kicking off this week at the Vaults…?

That man has more energy than anyone has any right to have – I think Red Bull may have fuelled that performance in Edinburgh. In Loyal Company is the perfect show for this event because it is one man on stage, a minimal set and his energy propels the whole one-hour show.
I’m also looking forward to Thomas – a show about a boy with Aspergers’ syndrome and Katie & Pip – which is about a life-saving dog, it’s a show with a real dog in it, so that’s pretty cool.

I’m also proud of Counting Sheep which is by the directors of the Belarus Free Theatre – it’s billed as a  ‘Guerrilla Folk Opera’ with a story based on the Kiev uprising, people are responding very well to it in previews. It is a huge show to get into the space.

I like all the really fun stuff too, like Cabaret Sauvignon by Stiff and Kitsch.
I like that mix of ridiculously silly and poignant and serious and breathtaking, that’s what Vault’s about.

equalityVault FestivalVaultswhat to see
You May Also Like
For Black Boys: ‘An autopsy of the heart of a Black man’.rebecca@visionaryarts.org.ukApril 29, 2022April 29, 2022