The winners of the 2019 Visionary Honours Awards 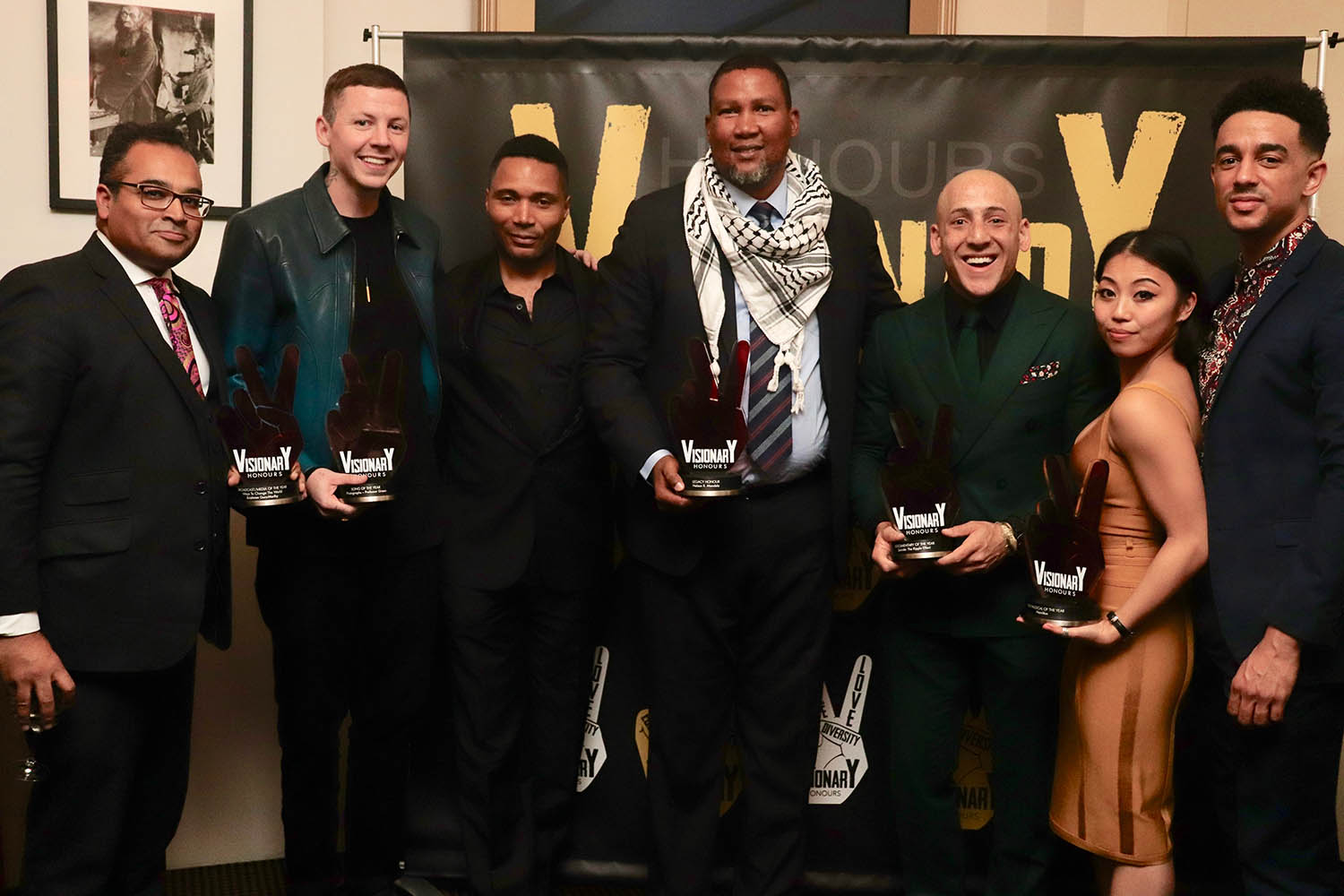 The category winners were:

FILM OF THE YEAR – Black Panther

Marvel’s box office smash Black Panther represents a landmark moment for black culture. With a majority of black talent both in front of and behind the camera, it celebrates traditional African culture and aesthetic beauty alongside African-American politics in a lush imaginary landscape typical of the Marvel franchise.

DOCUMENTARY OF THE YEAR – Suicide: The Ripple Effect

This documentary feature sets out to combat the global crisis of suicide. The film highlights the journey of Kevin Hines, who at age 19, attempted to take his life by jumping from the Golden Gate Bridge, survived, and is now a motivational speaker. By sharing stories of survival and recovery from people who have attempted to end their life, the film has become a key tool in the fight for suicide prevention worldwide.

Stephen Manderson, aka Professor Green, lost his father to suicide in 2008 and has since campaigned to prevent male suicide including making a documentary, Suicide and Me on BBC Three to raise awareness of the issue. His single, in collaboration with Rag n’ Bone Man “Photographs” is a poignant tribute to his father and a reflection on loss.

We are told by the media that we are living in a loneliness epidemic, but fashion blogger and viral campaigner Chidera Eggurue’s (AKA The Slumflower’s) book turns that concept on its head by highlighting the importance of finding time to spend with oneself when technology is constantly connecting us to others.

TV SHOW OF THE YEAR – Doctor Who

Malorie Blackman and Chris Chibnall collect the award for TV Show of the Year for Doctor Who, awarded by Danny John Jules

The BBC’s flagship show has taken the organisation’s ethos of diversity to its heart. The series opens with a new female Doctor (Jodie Whittaker) and two new ethnic minority companions, played by Tosin Cole and Mandip Gill. The initial scenes show a young, black dyspraxic man (Cole) learning to ride a bike and the series then goes on to tackle thorny issues about racism in the UK, class barriers and gender-parity, all while travelling through space and time and fighting aliens. Acclaimed children’s author Malorie Blackman is the first black writer the show has ever had (she wrote Rosa, the Rosa Parks episode) while award-winning Vinay Patel is the first writer of Asian descent to contribute a story (Demons of the Punjab).

PLAY/MUSICAL OF THE YEAR – Hamilton

Hip-hop musical Hamilton is a popular, critical and financial success. The show tells the story of America’s Founding Father, Alexander Hamilton, an immigrant from the West Indes who became George Washington’s right-hand man during the Revolutionary War and helped shape the very foundations of the America we know today. has won 11 Tony Awards, including Best Musical. The Rockefeller Foundation, believing the show is a “catalyst for social change”, bought $7.5 million in tickets for public high school students in the States.

BROADCAST/MEDIA OF THE YEAR – Ways To Change The World (Podcast)

Krishnan Guru-Murthy’s podcast takes one hour per episode with some of the greatest thinkers in the nation to explore the big questions around how to solve society’s ills and what we want our future to look like.

MOST INSPIRING PERSON OF THE YEAR – Michelle Obama

One of the most famous women in the world, the former First Lady of the United States is an international icon known for her grace, humour and intellect. She is a role model as a woman of colour, an advocate of LGBT rights and a strong supporter of access to education for girls and a campaigner for adults and young people to take care of their health. Her new memoir Becoming is the best-selling book of the year.

COMMUNITY PERSON OF THE YEAR – Rachel Wang of Chocolate Films

Rachel Wang co-founded Chocolate Films in 2001 and has produced and directed many of its films. The organisation employs a large full-time team of talented filmmakers who split their time between making films for high profile clients and running creative workshops for children and young people. Chocolate Films has grown organically since it was founded in 2001 and now has offices in London and Glasgow. In 2017, Chocolate Films worked with over 5000 people on workshop projects and short films in London, LA and Singapore for clients as diverse as Big Issue, Jeep, National Autistic Society, National Gallery, The Royal Society, St Mungo’s and Divine Chocolate.

Nelson Mandela is an enduring symbol of positive change in the world. He once said: ‘Action without vision is only passing time, vision without action is merely day dreaming  , but vision with action can change the world.’ It is upon this principle that the Visionary Arts Organisation is humbly founded. Proceeds from the evening were contributed to The Nelson Mandela Children’s Fund, which was established by Nelson R. Mandela when he became President in 1994 to improve the treatment and future prospects of children in South Africa. It has since evolved into a registered charity that helps up to 100,000 children and young people every year.