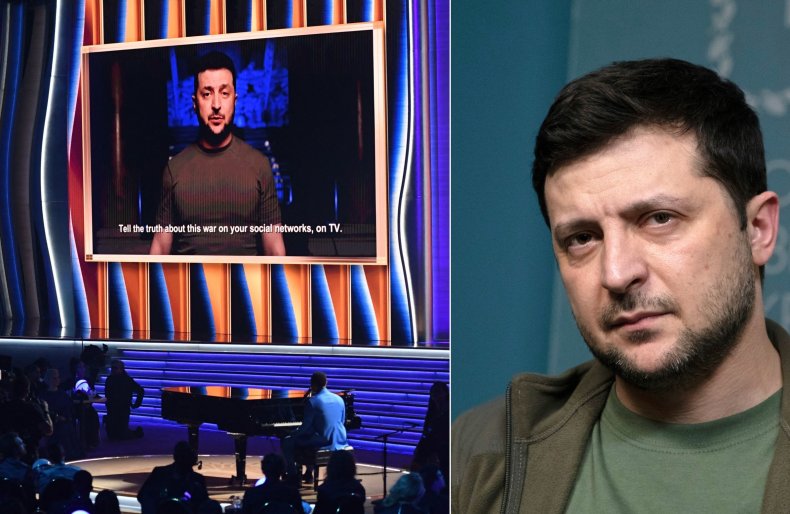 Ukraine’s president Volodymyr Zelensky, chose the biggest musical event of the year, the 64th annual Grammy Awards, as the platform to deliver his powerful speech where he urged artists to use their own platforms to support his country’s war with Russia.

In his emotional plea, he called on musicians to fill the silence caused by Russian bombs, with music and implored viewers to support via their social networks. He said:

“Support us in any way you can. Any. But not silence”

Zelensky, who has been outspoken in gathering international support for his country since it was invaded by Russia in February said:

“Our musicians wear body armour instead of tuxedos…they sing to the wounded. In hospitals….the music will break through anyway”

His speech was followed by a moving performance of ‘Free’ by singer John Legend, who as joined by Ukrainian artists Mika Newton, Lyuba Yakimchuk and Siuzanna Igidan.

The war. What is more opposite to music? The silence of ruined cities and killed people. Our children draw swooping rockets, not shooting stars. Over 400 children have been injured and 153 children died. And we’ll never see them drawing. Our parents are happy to wake up in the morning in bomb shelters. But alive. Our loved ones don’t know if we will be together again. The war doesn’t let us choose who survives and who stays in eternal silence. Our musicians wear body armor instead of tuxedos. They sing to the wounded in hospitals, even to those who can’t hear them. But the music will break through anyway. We defend our freedom to live, to love, to sound on our land. We are fighting Russia, which brings horrible silence with its bombs. The dead silence. Fill the silence with your music. Fill it today to tell our story. Tell the truth about the war on your social networks, on TV. Support us in any way you can. Any — but not silence. And then peace will come. To all our cities the war is destroying — Chernihiv, Kharkiv, Volnovakha, Mariupol and others — they are legends already. But I have a dream of them living and free. Free like you on the Grammy stage.

You May Also Like
Ncuti Gatwa has been announced as the next Doctor Who.rebecca@visionaryarts.org.ukMay 9, 2022May 9, 2022 April 26, 2022April 26, 2022|BY rebecca@visionaryarts.org.ukNetflix’s Heartstopper: ‘A queer story told through an optimistic lens’