Anna Jordan: ‘The decline in pub culture shows a decline in our communities’ 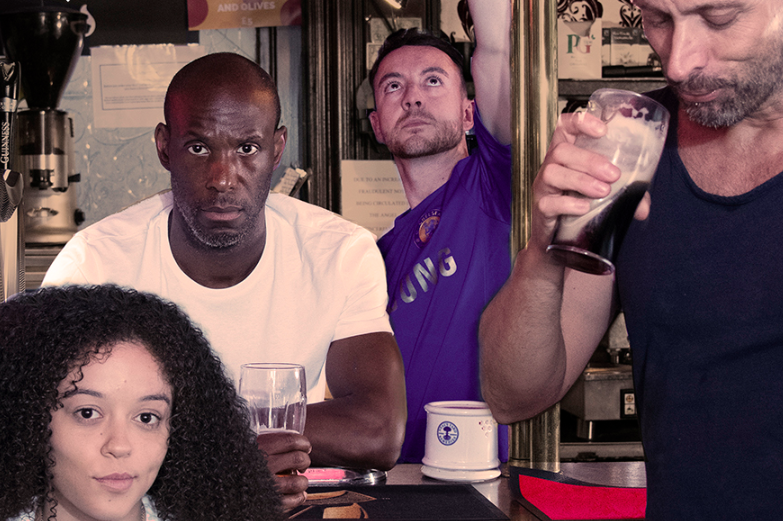 Anna Jordan’s play Yen won the Bruntwood Prize 2015 for playwriting. She is also a director and acting tutor. Her show We Anchor In Hope about pub culture runs at The Bunker until 19 October.

Writing this play was a real labour of love. I wanted to explore what ‘the pub’ meant in this day and age and how the decline of the pub was affecting communities. Pubs mean many things to many people: a place to relax and unwind, a place for company and comfort, a place to let loose and go wild – and for some it is (literally or metaphorically) a home.

Traditional boozers or local pubs are places of history and memories. I was particularly interested in exploring the intergenerational nature of pubs. I wondered where else people of different generations might spend an undetermined length of time together. The youngest person in the play is 20 and the oldest 77, I was fascinated by how the pub would be a space for them to interact.

The play is set in Pimlico. It was originally commissioned by the Royal Court Theatre as part of Beyond the Court in 2016. Chris Sonnex, then Associate Director at the Court, sent me into pubs in Pimlico to buy drinks for people and talk to them about their lives, their area and what pubs meant to them.

The play is a fictional piece in response to the many chats I had with some fantastic and generous people. We performed it as a rehearsed reading at a pub in Pimlico in 2016 and it has been reworked for this, it’s premiere at The Bunker in 2019. Pimlico is a strange microcosm of London. Owners of excessive wealth live cheek-by-jowl with people living in severe poverty. On a housing estate one person may live in a social housing unit claiming housing benefit, and next door virtually the same flat could sell for half a million pounds – as it has been bought as part of the right to buy scheme, and successively passed from landlord to landlord. I wanted to explore some of these inequalities.

More than 25 per cent of pubs have closed since 2001 and are still closing at the rate of two a day. They make way for gastro pubs, coffee shops, estate agents, micro-supermarkets and – probably most commonly – luxury flats. Pub closures are indicative of the sort of erosion of community that is happening all over London.

It is probably cheaper for someone vulnerable and probably elderly to sit in a pub all day nursing a couple of pints than to sit at home using heat and light.

Although I hope that the play wears it’s politics lightly, each character is affected by austerity and the chaotic nature of our current times. One thing that played on my mind is the idea that it is cheaper for someone vulnerable and probably elderly to sit in a pub all day nursing a couple of pints than to sit at home using heat and light. (Not to mention a pub provides real company). It is for the lonely and vulnerable I fear most the loss of the pub as a civic space. The play was written between the Brexit vote and Trump being voted in – placing it in a very unique time in history. It explores a moment of extreme uncertainty – in the world and in each of our characters’ lives. But what features more vividly is the housing crisis. One character lives in constant fear of losing their housing benefit. For more than one character the pub closing means an end to their physical home. For the Anchor’s landlord the housing situation is very different to when he took over the pub twenty years ago. His time as a publican is over – and now there’s no way he can afford to stay in London. Even a bedsit is wildly out of his price range.

So pubs can be meeting places for communities – social hubs where patrons of different ages, races and social classes can mix. But that’s not to deny that alcohol itself can be extraordinarily damaging to relationships and communities. I worked in pubs for years as a teenager and in my twenties and I saw a lot of people who would enter the pub as chatty, friendly people and leave eight hours later a very different picture. I saw how alcohol was more than a lip loosener, a social lubricant. I saw how it changed personalities, warped perspectives and locked people in the past. There are seven characters in We Anchor In Hope, five human ones but alcohol is a character too, and the pub itself.

In We Anchor in Hope the pub means something different to each character and it’s loss is felt keenly but in very different ways. Despite the heart-wrenching events, it’s full of laughter and joy too and I think explores the best that the British Pub has to offer.

Anchor in HopeThe Bunker
You May Also Like
For Black Boys: ‘An autopsy of the heart of a Black man’.rebecca@visionaryarts.org.ukApril 29, 2022April 29, 2022